If I was Jesus by Toby Keith: http://youtu.be/Z6PJxE9MlZ0

I’ve been a dog lover all my life. Severely bitten at 6yrs old. The dog was on a chain. The owner told me he is mean. With all the love in me, I began to feed him by hand, then I could pet him. I started to leave the dog and he almost took off my bellybutton. He was mad because I was leaving him to suffer on the chain about 8ft. Long. This dog was dieing because of no attention. I was patched up and love dogs even more. The dog was schooled and socialized and brought in the home. He became a good friend. Because I understood his pain. A dog is only as good as the owners. Now I help with dog behavior. I use love to understand them, 99.9% of the time that’s all that is required for a dog to be stable and nice. Dogs are cute little puppies and grow up with needs people don’t want to deal with. They only want to be a part of our lives, not pushed to the side or abandoned. Dogs are like a gun, you have to train yourself to use one. If you will go through the trouble of training chances are you will always have a great friend and a wonderful dog. All breeds are the same in this. Any of them can be mean, it’s how we act that they are reacting to. If you have a problem dog, spend every waking minute with him. He will generally grow very close to you and do exactly what and when you instruct him to do or act. Love makes the world go around. Animals are people to. Please give a dog a chance, you will never be sorry.

If I was Jesus by Toby Keith: http://youtu.be/Z6PJxE9MlZ0

I couldn’t believe it when the universe said I would be taken more serious if I bought followers. WTF if I need a following I’m nothing. My individuality is worthless. What is a following if you have to buy it. When we work for something we take care of it, things given easily are not appreciated. There for mean little. WTF!!!! 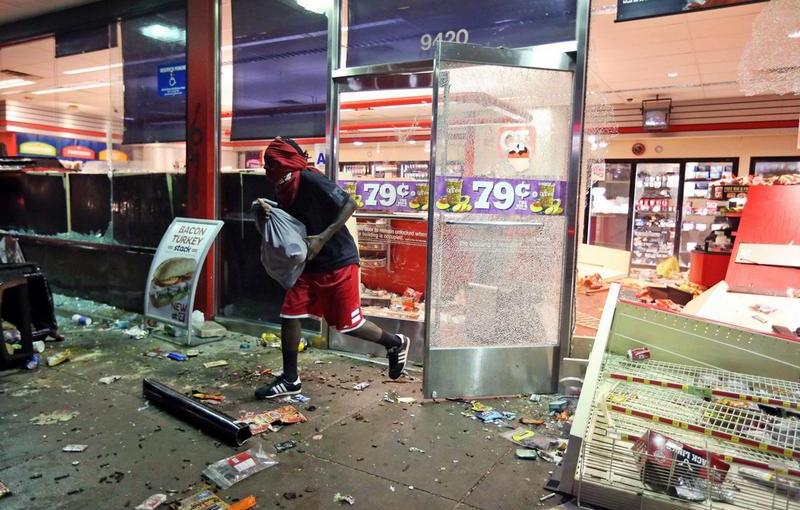 We need to reexamine looting.

Regarding its critics, let me start by saying that, at the level of determining solid community building options, critics of looting are right: it’s not productive. What is built from looting? Not much. Certainly nothing in the concrete world. On top of that, looting is illegal. It is against the law to break into a building and take what’s inside of it out. I don’t think anybody is confused about that, or believes that taking things out of a liquor store or burning down a Little Caesars should be confused with an urban renewal initiative. None of this, however, means that looting has no merit as an act.

Looting is a response, not an opportunity. Looting doesn’t randomly happen. Looting is what happens after something else has happened to a group of people that feel disenfranchised. There are not bands of random black people running…

Ya don’t mean the same anymore 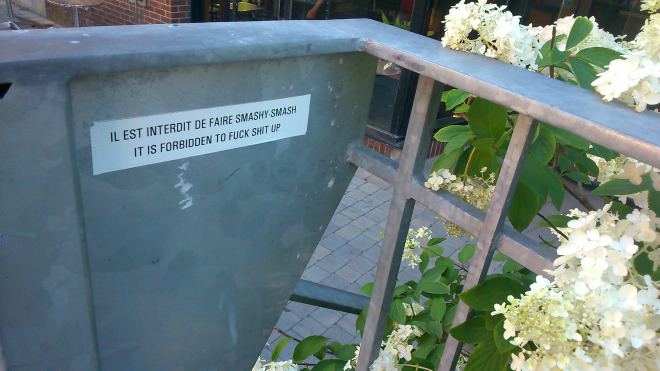 Il est interdit de faire smashy-smash.
It is forbidden to fuck shit up.

In the summer of 2013, long before Strong Language was even a glimmer in anyone’s fucking eye, I snapped the picture above on a street in Montreal. I encountered it near Concordia, but I’m not sure where the sticker itself came from: google suggests that it’s been stuck in at least two other places which also look like they could be Montréalais. And when this blog finally came around, I finally remembered it and knew I had a fucking opportunity.

First of all, there’s the sociolinguistic context of Montreal bilingualism, where even unofficial signs are often in both official languages: I’ve spotted homemade bilingual signs looking for lost cats, requesting that bikes not be chained to private railings, and declining flyers in mailboxes. In a city where over half of people are bilingual, one language might suffice, but if you speak both…

He has never changed, we the people has.

I’m so old school, don’t even know how to set up a website.